In late 2018 we opened our new distillery in Ballyduff, Co Waterford and fired up the whisky stills. We were (at long last) a whisky distillery, and with production under way it was safe to revisit a parked project: a sourced whiskey brand.

We’d done it once before a year earlier, when we released a 17 year old Irish single malt. The idea of Retronaut was to bottle short runs of limited older whiskies. It was supposed to be an ongoing project, but we weren’t the only ones with this idea and by 2018 the market was flooded with just such offerings, so we pulled back and had a re-think.

We’ve always been whiskey drinkers, not whiskey collectors and we knew if we were patient, that by the middle of 2020 it would be possible to revisit the category with a more consumer friendly proposition. And so Velvet Cap was born.

The brand itself is not new. Until the early 1960’s Velvet Cap was the local merchant whiskey, bottled in Dungarvan and at various times was made up of spirit from Jameson in Dublin or Daly’s in Tullamore. More on that and my use of ‘whiskey’ and ‘whisky’ next week, right now let’s just stick with what’s inside the bottle.

Digging into the files held in the local museum gave us a sense of how Velvet Cap mark I was matured. Bourbon casks were virtually unheard of in Ireland until after the second world war, but there was plenty of fortified wine and stout passing through the warehouse of  Thomas Power in Dungarvan (no relation to Sir James Power in Dublin). So that informed our approach, then we let our Head Distiller John Wilcox go to work.

As for the whiskey? For Velvet Cap we went with a premium 50:50 blend of malt and grain whiskies, which are pre-mixed then left to marry in the afore-mentioned casks for another six or so months. Then we’re ready to bottle the plan was to add the ex-port stock until we were happy, then we’d be good to go.

Oh yes, ‘the best laid plans’, ‘if only we knew then what we know now’… If this was a regular blog we’d just leave those two clichés hanging because they’re vague. But this is Blackwater, so welcome to the sticky underbelly of the craft sector.

In early March 2020, just as Covid-19 was starting to bite in Ireland, we pulled the final samples from our casks and with a calibrated test tube in one hand and a nosing glass in the other, we set about giving Velvet Cap mark II it’s final shape. We mixed and tasted and argued and then tasted some more. Eventually we reached that happy spot knowing full well this was really just a dress rehearsal. We were dealing here with millilitres of whiskey, not thousands of litres. We’d get the exact blend right on the night, when all the casks were at our fingertips.

Then came the lock down.

There was now no way to get to Great Northern. No Supermac’s at Juntion 14 on the way up, no sneaky pint in The Lady Belle when we got back.

Forget calling out for a pizza, we were about to take delivery of a small lake of whiskey via Deliveroo. There would be no final tweak.

But to use an up-to-the-minute analogy, John Wilcox is a ‘A’ student. He had done his fractions homework and even though he didn’t get to Dundalk for the final exam, he did ridiculously well and got enough points to study astro-physics at Harvard.

The whiskey was brought to strength, 40% for the regular version and 46% for an airport edition. Due to the high proportion of ex-stout casks the finished blend was a little cloudy, but it tasted magnificent and we have an all singing and dancing bottling line, so there was nothing to worry about.

Five minutes into the bottling run we stopped. The filers on our line just weren’t fine enough to take out all the haze. 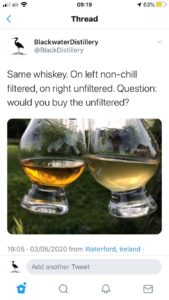 On the left a sample of whiskey from the top of a tank, on the right a sample from the bottom.

It turns out that upgrading filters in the middle of a pandemic is akin to landing man on Mars. Yes, of course it’s possible, we’re just not sure when it will happen.

So we reached out to our friends at Merry’s in Clonmel and they turned the job around in under a day. Clean, bright and not at all hazy we were finally able to bottle Velvet Cap.

We’re still in the middle of a global pandemic, and as you can tell from the story so far, nothing is as simple as it used to be. We hope to have Velvet Cap available in independent off-licences and the usual on-line retailers on the island of Ireland by late May. Sláinte!

P.S. There is one more twist in this story, but I’ll hang on to it for now. It’s an interesting thing to debate, and it will make a lot more sense to talk about it when we launch something extra special later this year…