A Dó, from the Irish for ‘two’ is a collaboration between two distilleries, Blackwater in Co Waterford and Killowen in Co Down. Two distinct styles married in one spirit. Although both distilleries operate in separate jurisdictions, Blackwater in the Republic and Killowen in Northern Ireland, the rules governing poteen are all-island. A Dó is literally the distilled spirit of co-operation and friendship. It’s also the celebration of poteen, a category that after years in the wilderness is finally finding its feet.

So how does the collaboration work? 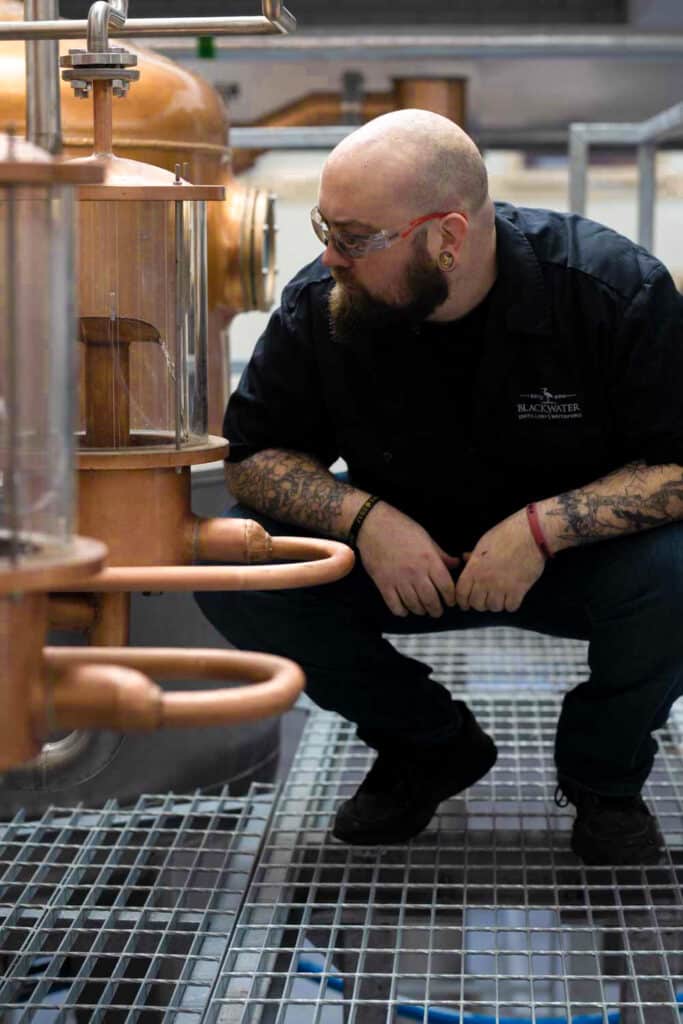 Barley is the spine of the drink, so Blackwater sourced some very special barley for this poteen, a landrace ‘variety’ from the 19th century or even earlier. Landrace in this case refers to a grain cultivated by farmers over the generations. So nobody owns it, and everybody owns it. Landrace varieties have a very broad genetic base, virtually guaranteed to yield some crop, but what crops will vary from year to year. Over time as the farmer saves and sows, the barley adapts to the locality. This is the oldest Irish barley we know of, it is a unique reservoir of genetic information accumulated over centuries of cultivation. During the twentieth century most of these landrace varieties were replaced by grains developed by private companies. These seeds often hybrids, tended to be better suited to modern agriculture, so were heavier croppers, or easier to harvest, or would be disease resistance. This is not mono-cropping, but genetic diversity was lost. The handful of Old Irish grain that existed was kept viable in the genetic seed bank and under guidance from the Irish Department of Agriculture, it was bulked out initially for brewers, but soon we got to hear of it. We work with farmer Garrett Heaton who has grown and malted this barley for us, the unmalted version of Old Irish is used in this poteen.

When the barley arrived at the distillery our Head Distiller John Wilcox actually laughed. Old Irish doesn’t look like a modern barley because it’s not, it looks a bit like a cross between some hirsute grass and a load of hedge clippings. However when ground and lautered the scent was both familiar and different. Greener, grassier and somehow wilder, this barley was almost gamey. It married wonderfully with the oats from Killowen which were huge plump grains.

The oats we both used were grown overlooking Carlingford Lough which is a glacial fjord, so a landscape with clay soil and plenty of marine influence. Brendan from Killowen is a bit of an oat nut, as is our John, they are indeed partners in porridge. All the oats were malted by Brendan on site in Killowen in his famous ‘turf shed’. Brendan then sent oats and some peated malt south, while we send our heritage barley north. Both distilleries then produced a poteen using the same mash bill. Both spirits were vatted and brought to bottling strength, with both distilleries each bottling half the distillate.

The branding was designed to mirror the collaboration, with colours reversed; Blackwater having the orange wax, Killowen the green.

This is a once off, strictly limited production. Both companies only have a couple of hundred bottles, so first come first served.

The Blackwater edition can be bought directly from Blackwater

And a handful of retailers have both editions…