This is like a box set, welcome to part III, the story so far can be got here and here. Or the pre-title teaser goes like this:

In previous episodes we started to build our case exploring how the Technical File for Pot Still Irish Whiskey which underpins the G.I. was drawn up in 2014 not to protect the category, but rather to protect two pre-existing brands…

The One with the Smoking Gun

Let’s start with what a G.I. (Geographic Indicator) actually is and why it’s important.

‘The geographical indication identifies a spirit drink as originating in the territory of a country, or a region or locality in that territory, where a given quality, reputation or other characteristic of that spirit drink is essentially attributable to its geographical origin.’

The Technical File contains the rules which have to be met if a drink is to qualify for a G.I. The benefits and protections that come with a European Union G.I. are many, as this 132 page document drawn up for the Chinese market will demonstrate. Put it this way, if you are a Cornish Pastie maker you won’t be undercut by Chinese Cornish Pasties, that is until the end of March at any rate. After that you are fucked.

Pot Still Irish whiskey is a uniquely Irish mix of malted and unmalted barley plus other grains. Since before dinosaurs ruled the earth until 2014, you could use what ever combination of grain you fancied when making this whiskey. Then suddenly, with the adoption of that Technical File in 2014, the brakes are applied and a minimum of 30% barley and a minimum of 30% unmalted barley was imposed, along with a maximum 5% limit on other grains.

So if you wanted to control the category, policing what went into that Technical File was key. For example, even though Pot Still Irish whiskey has to be ‘distilled in a pot still’ there’s this:  ‘Still residues may be collected and redistilled in column stills with the resulting feints subsequently distilled along with recycled pot still feints in a pot still.’ This is clearly a process Midleton wanted to continue, so getting it into the rule book was essential.

But back to the bigger picture, the no less than 30% malted, 30% unmalted barley + no more than 5% grain mix. According to the Technical File, ‘each distillery has its own recipe within the parameters outlined above,’ which at the time applied only to one distillery and in all my research I have yet to come across a single historic Pot Still mash bill that fits this description.

So the ‘recipe’ in the Pot Still Technical File was retrofitted into history. Why? With only one company at the table making Pot Still Irish, I would argue that restricting particularly the amount of ‘other grains’ allowable to only 5% was to prevent the flavour profile of this new category straying too far from Redbreast or Green Spot.

Which means we have a Pot Still Irish Technical File describing best practice which has no historical basis and one that reflects the working practices of a single distillery. To be clear, Redbreast and Green Spot are evolutionary outliers. So defining Pot Still Irish whiskey solely in terms of its current shape makes no sense. The Labradoodle can trace its linage back to the wolf, but that doesn’t make it a wolf.

Ok I hear you cry. All those other mash bills which E.B. McGuire in this book Irish Whiskey dates back to 1785, as so bloody old they don’t count. All that matters is now. You see the problem with that is that getting a G.I. is not an easy task, there has to be a cultural and historic basis for any claim.

It’s true that in response to the tsunami of Scotch that threatened the industry, over time Pot Still Irish not only homoginised, but also simplified. The flavour was diluted, with less and less focus on those forceful ‘other grains’. By the 1950s and 60s the category was on life support, but there were still five independent producers.

It’s January 1953 and in a submission to the Irish Government, The Irish Pot Still Distillers Association defined Irish Pot Still Whiskey as follows: ‘Barley supplies about 80%, oats 15% and wheat 5% of the distillers’ cereal requirements.’ The letter was signed by Jameson, Powers, Cork Distillers, Tullamore, and Locke’s.  This tallies with the following from Locke’s distillery (1912 – 42) which independently sets the levels at: 40% malt, 40% barley, 5% rye (transitioning to wheat in the 1940s), 15% oats.

This then is literally the last mash definition put forward before the industry contracted to a single producer. 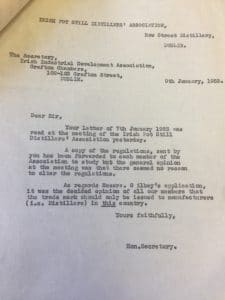 So as late as the 1950s there is no mention of 30:30:5, and by 1966 the Irish whiskey industry had collapsed into the monopoly of Irish Distillers (later Pernod Ricard). It would seem that everything that happened before this point in time is nothing more than an inconvenient truth.

By the time the Alcohol Textbook edited by T.P Lyons was published in 2003, it’s clear Pot Still Irish whiskey had pretty much faded from view. Here the author mentions 5% oats, but is so far removed for the reality of the drink he is unsure if its inclusion was to help strain the grain bed, or to add flavour. But it doesn’t explain where that 5% came from in the first place, but it’s not easy to hazard a guess, as in the 50 years between 1966 and 2016 only one company produced Pot Still Irish whiskey. 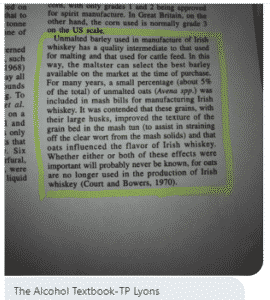 Which all leads to one question. If the Technical File that underpins the G.I. doesn’t reflect best broad practice, cultural heritage, historic fact and known practice – is it valid? Or more worryingly being based on the reality of just one producer, does the definition of Pot Still Irish whiskey contained in the Technical File undermine the very G.I. it is there to support?

This is serious stuff. If the house of cards collapses, then what? We would argue that we need a definition of Pot Still Irish whiskey that more accurately reflects the spirit of the spirit (if you know what I mean), one that will stand some scrutiny and isn’t the work of one author.

The research here isn’t all mine, I am grateful to Fionnan O’Connor, Charlie Roche and Will Murphy among others for pulling the paper trail together.