There are a couple of questions I get asked all the time.

Us whiskey snobs can roll our eyes all we want, but those questions are more valid that you first might think. Remember most American’s believe Irish is a form of Scotch; as for the difference between Single Malt, Single Pot Still, Blend, Bourbon etc; well they’re all brown aren’t they? 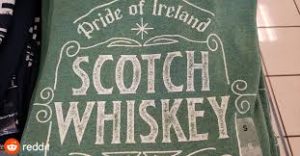 So back to question 1. What is the difference between Scotch and Irish? Forget the usual tropes, Irish Whiskey doesn’t have to have to contain an ‘e’, it doesn’t have to be triple distilled, it’s got nothing to do with Peat either. Take Pot Still Irish out of the equation, (because most people don’t know the fuck what it is anyway) and let’s talk about the category the Scots have made their own – Single Malt.

Again (baby steps) a single malt isn’t half a double malt, it’s a type of whiskey made from malt, in a single distillery, in pot stills. Irish or Scottish, doesn’t matter both are aged for three years. In Scotland it has to be an oak cask, while in Ireland it can be made from balsa wood (if you could be arsed). So the only other notable difference is that Irish whisky has to be made in Ireland, while Scotch whisky has to be made in Scotland.

Yup. It’s like finding that the answer to life the universe and everything is actually 42.

We spin a line that Irish whiskey is unique, and in a way it is, because it’s legally defined as unique (it’s made on the island of Ireland). But what makes the liquid unique? Here we have a problem.

So you’re an Irish distillery, you want to import metric-shit-tonnes of barley from France, distill it, then stick said spirit in a Spanish cask? That’s cool. I will wave my magic distilling copper wand, and three years later – Irish Single Malt.

So you’re a Scottish distillery, you want to import metric-shit-tonnes of barley from France, distill it, then stick said spirit in a Spanish cask? That’s cool. I will wave my magic distilling copper wand, and three years later – Scotch Single Malt.

Which brings us neatly to: why do Irish whiskies all taste the same?

Because most of them come from one of two distilleries (see ‘innovation’ sub-clause above).

We can do better.

Surely there has to be more to the category of Irish whiskey than Jameson, Dublin 12 and barrel finishing (so innovative back in 1987 somewhere in the vicinity of Glenmorangie).

What if Irish whiskey wasn’t defined by the post-ice age flooding that turned this landmass into an island? Because, you know what? Unless we are careful, that’s how random and meaningless the category of Irish whiskey will become. In the great auditorium of spirits, are we nothing more than the support act to the Proclaimers?

Down the road from us and Waterford Distillery are spear heading a revolution. You’ll never guess what the mad feckers are up to? They are making Irish whisky from Irish barley. I know! Bat-shit mad.

Here at Blackwater we’re not only using 100% Irish barley (wait for it), we’re also using 100% Irish wheat and oats! I know. Fucking mental! We still import rye (because we can’t get any here), but that will change later this year.

What’s more we are working with local farmers, and a craft maltster! LOL! (as my 10 year old son would say) LOFL! We’re also bringing Heritage (aka Second Hand) Grains back into the food chain. It’s the Heritage Grain Project, a five year mission to explore new worlds, seek out… sorry. A five year mission to bring Heritage Irish grains back into use. Because if there’s one thing an accountant loves more than Irish grain, it’s a cheaper imported grain. But barley grown for flavour, famous for low yields and a total fucker if you’re driving a combine harvester that costs more than the average house? That’s the way of madness.

So why are we doing this?

Because there has to be more to Irish Whisky than two soccer teams and one rugby team.

There has to be more than Protestant Whiskey and Catholic Whiskey.

And there certainly has to be more than the fifth letter of the alphabet.

Because you know what? If that’s our only point of difference, then were rightly fucked.