Here’s a couple of timely questions that are worth exploring, as they tie into our ongoing work at the distillery. 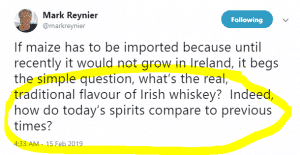 Mark Reynier of Waterford Distillery recently asked a couple of pretty fundamental questions that have been taxing me since I read the original draft of the Technical File.

When we talk about traditional whiskey, we are of course talking about Pot Still Irish whiskey, a mixed mash bill of malted barley, unmalted barley and other grains. As to how it compares to what passes today as Pot Still Irish, that’s where this blog comes in.

In short, my theory is that the Technical File for Pot Still Irish Whiskey was drawn up in 2014 to protect pre-existing brands, not to protect the category. This was done mainly by restricting the amount of ‘other grains’ allowable to 5%; however, in the past the amount of ‘other grains’ i.e. rye, oat, wheat, corn varied between 70% and 10%. In all my research I have yet to come across a historic Pot Still mash bill that is compliant with the current Technical File. We went into it in some detail last week, and you can catch up on part one here.

To answer Mark’s second question first, modern Pot Still Irish whiskey tastes nothing like it did in the past, which leads us nicely to his first question which contains that key word ‘flavour’.

It all comes down to how much impact the 5% of ‘other grains’ will have on the taste of Pot Still Irish whiskey.

To answer that, we started by distilling a 100% single malt.

The following week we put together a mix of 70:30/malt:unmalted barley, and got to work distilling G.I. #1 which is compliant with the current definition of Pot Still whiskey.

A week later we trialed a mix of 65:30:5/malt:unmalted barley/other grains – better known as G.I. #2 and again compliant. To be even handed, we split that 5% three ways, using 33.3% oats, rye and wheat. So in our half tonne of grain that was about 8.3kg of each of the most common ‘other grains’ used.

We distilled each of these variants several times to iron out any inconsistencies. Then we let them sit for another week to settle into themselves. Then we took out our nosing glasses.

As you’d expect 30% unmalted barley gives a very different spirit to 100% malt. The Pot Still new make is brighter, and fizzes with green apples, linseed with a hint of peanut. 30% of barley gives you a totally different spirit, so a G.I. for Pot Still Irish is totally justified and now we had a yardstick to measure any future shifts in flavour.

In my head the difference between G.I. #1 and #2 wasn’t going to be much. During distillation I had the impression that both spirits were similar, that we’d end up with ‘Danny Boy’ played first on a banjo, then on a mandolin. So I was not prepared for the instrument that jumped out of my glass. Side by side these distillates are day and night, trad and jazz, string and wind. 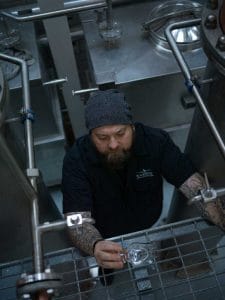 A 5% difference in grains used can and does have an impact on flavour. Also remember that the 5% was split between rye, oat and wheat, so none of these ‘other grains’ was allowed to dominate. Remember 30% of unmalted barley will turn a Single Malt into a Pot Still whiskey, so it stands to reason that allowing say a 30% variance in ‘other grains’ will have a radical impact on the flavour of the final Pot Still Irish whiskey. No wonder the vested interests put a limit on the quantity of ‘other grains’ allowed.

This then seems to bear out my theory that under the new Technical File, the flavour of Pot Still Irish whiskey would not be allowed to drift too far from from the yard stick hammered between the pre-existing brands Green Spot and Redbreast.

But don’t take my word for it, see for yourself by pouring out a snifter of this recent Kilbeggan release.

Distilled from a mash bill of malted and unmalted barley with around 30% of Rye, this % of other grains is pretty typical of what historically was sold as Pot Still Irish, however rye was usually no more than 6%. So this is a modern interpretation, but very much from the tradition that a G.I. is supposed to represent, celebrate and protect. Even though it was distilled before the current definition when it was a Pot Still Irish, it cannot now be sold as such. As it stands, the Technical File is a monument to cultural appropriation, as we’ve allowed some vested interests to redefine our heritage to suit their own commercial needs.

So let’s have some fun. Let’s snap that yardstick. Over the next six months we’re going to distill each and every historic Pot Still mash bill we can get our hands on, so let’s start here:

This little piece of loveliness was dug up by Fionnan O’Connor and comes from evidence given to the Royal Commission by James Talbot Power. It’s pretty much the mash bill used by Power’s distillery in Dublin in 1908, so if it doesn’t count as a Pot Still Irish Whiskey, then what the fuck does?