Ah Pot Still Irish whiskey, that historic mix of malted, ummalted barley and other grains that’s uniquely Irish, I mean what’s not to love? Redbreast carries the standard, it’s a bloody fine whiskey, possibly the best Irish out there. Green Spot (along with yellow and red), again Single Pot Still Irish whiskeys and again awesome. No problem here. Nothing to see folks, just buy this gift pack… which I did. 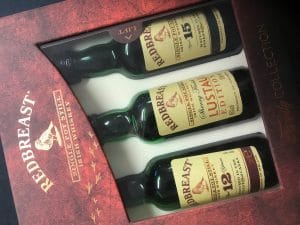 According to an stylish insert, I am holding nothing less than ‘a reflection of Irish Whiskey as it used to be.’ The official Redbreast website is even more confident: ‘this is the traditional way of making Irish whiskey since the 1800s.’ Except of course it’s all a load of horse manure. These whiskeys are not a reflection of anything, except perhaps corporate slight of hand and a lack of oversight. If truth be told, the ‘tradition’ being celebrated here goes all the way back not to the nineteenth century but to October 2014.

Let’s back up a moment. Until 2014 no one had bothered to write out a Technical File or rule book for Irish Whiskey covering how the stuff was made . But to qualify for Geographic Indication (G.I.) status from Europe, a Technical File was needed explaining how it was made and and why it qualified for G.I status.

So what is Pot Still Irish Whiskey? Clearly a definition didn’t exist, but a similar question was asked back in 1908 when an independent Royal Commission set out to defined what constituted whiskey. Was spirit from a continuous still whisky? Yes. Was a minimum percentage of malt required? No. Over 37 exhaustive sittings Irish and Scottish distillers were cross examined, as the Commission wrestled to agree ‘what is whisky’, and to this day their findings largely shape the industry.

So one hundred years later here was a chance to build on that. The Irish Whiskey Association (IWA) was established and under its auspices work on drawing up the Technical File began. But instead of a stand alone commission taking evidence from interested parties, the IWA had those interested parties setting the agenda and making decisions with no independent oversight.

Sitting in the room were the whiskey producers of the day. At the time only one of them was making this style of whiskey and that was Pernod Ricard at their Midleton Distillery. They produced it for anyone else around the table who had need of it (ie William Grant for Tullamore Dew). They held the IWA chair, they were and still are by some way the largest and most powerful distiller in the country. This then is how the Technical File ended up defining a Pot Still Irish Whiskey mashbill.

Now read this bit slowly. In all my 19 years of research I have never yet seen a single historic mashbill for Pot Still Irish that is compliant with that definition. Not one.

So what we are left with is a Technical File defining a category of Irish Whiskey that never existed.

Suck on that for a while, take a moment, stroke a kitten, take deep breaths and ask yourself what was going on?

At this point we’ll back up further, because sometimes you need to see the bigger picture.

Pot Still Irish Whiskey had never been pinned to a sample board, given a Latin name and legal framework, however it existed and is referred to in texts going back at least two hundred years. It is always a whiskey made from a mixed mashbill, and that mix varied from location to location and indeed from season to season. Barley and malt were always dominant, with oats, rye, wheat and even corn bulking things out. For example from early 20th Century brew house journals we know that up to 30% of a mash in Allmans distillery in Bandon consisted of ‘other grains’.

Indeed the house blend used by a distillery was a well kept secret, so much so that it led to some testy exchanges when distillers were probed by the Royal Commission.

‘Different distillers have different mixtures…’ is how Andrew Jameson put it. ‘And I should hardly like to go and give publicly what we use.’ But when pressed Jameson conceded that ‘something like 4/5ths of the mash would be barley, malted and unmalted…’

As for that other 1/5th, Andrew Jameson set it out as follows: ‘The rye is extremely small, the wheat is something like four times the rye, and the oats is rather more than double the wheat.’

James Talbot Power was equally evasive. After a dodging the question again and again, about what exactly was in Power’s whiskey, the Commission finally pulled together his fragmented responses:

‘Yes,’ was his succinct response, ‘it would come nearer.’

So at the start of the 20th Century we have firm evidence that in Pot Still Irish whiskey ‘other grains’ were typically between 10% and 30% of the total. Go back further in time, to the 19th Century and during the first golden age of Irish whiskey, oats and rye were much more prominent, in 1838 we have a thumping 70% oats, rye and wheat used.

Given that this mix of grains is what made pot still Irish unique, you’d think the Technical File would reflect that. But you’d be wrong. In fact ‘other grains’ cannot amount to more than 5% of the total. Not 70%, not 30%, not even 10%.

So where did this magic 5% come from?

Over time the ‘other grains’ used in the Pot Still Irish had slowly but steadily gone into decline, as producers here dialled back the flavour profile of their wares as they were strugged to stay relevant in a world in love with Scotch. By the time the old distillery in Midleton closed, I understand the level of ‘other grains’ had dropped to just 5% oats.

If the Technical File for Pot Still Irish doesn’t represent the category it purports, then what does it do? It quite simply allowed for the hijacking of the term ‘Pot Still’. Not one of the historic mash bills I have see is compliant with the new definition. What we have then isn’t a G.I. protecting a uniquely Irish category, but instead an insurance policy that Pot Still Irish Whiskey could never be made again as it used to be. What we have is a G.I. built to fit Redbreast and Green Spot.

We let the biggest kid in the playground write the rules to a game they created, and now everyone has to play with their ball.

Across the water, 2014 also saw Pernod withdraw their support for G.I. protection for its Plymouth Gin. This would have been the UK’s only gin with G.I. protection. The Spirits Business reported an official statement from Pernod Ricard “We have decided to withdraw our support of the Protected Geographic Indication for Plymouth Gin. Plymouth is an extremely well known and respected brand of gin, solely produced by our business and its predecessors for over 100 years.’ Then the kicker. ‘The brand name Plymouth is synonymous with our business.’ In other words if the G.I. had been awarded then anyone following the Technical File could make ‘Plymouth Gin’ and this would of course have impacted on Pernod’s Trademark.

My favourite bit though it this piece of double speak: ‘A spokesperson added that Pernod Ricard felt a G.I. should represent a collection of brands, rather than just one.’

In 1908, while investigating what exactly constituted whisky, the Royal Commission were interested in what grains did what, as it might have some impact on how they would define the spirit. Therefore they pressed Andrew Jameson on the impact the 20% other grains would have on Pot Still new make.

‘You give 1/5th within the limit of safety for other ingredients?’ They asked.

‘That would entirely depend on the amount of flavour that a man wanted to get.’

So the more ‘other grains’ used, the further the flavour profile of the whiskey will drift.

I have a hypothesis. The Technical File was ‘designed’ to protect current and future brand offerings because the producers of same didn’t want the taste profile of Pot Still Irish to shift too far from what they were already selling (thus the 5% cap on ‘other cereals’).

20% would have an impact, but a quarter of that? What level of drift would 5% have on mash? Would it be radical or would a galloping horse even notice?

That’s the great thing about owning a distillery. You can put a hypothesis to the test…