It’s May 31st 2020 and today we launch Velvet Cap Irish Whiskey. Welcome to part 3 of our story. Parts one and two are amazing pieces of journalism and you’d be mad not to read them.

I ended that last blog with a question:

Does the world need another merchant Irish whiskey?

So let’s grasp that thorny rose.

There are now hundreds of Irish whiskey brands out there. Some driven by passion, some by greed; some will succeed, some will fail. But we must remember this: they are all heroes of their own story.

How then can you winnow the wheat from the chaff? A good indicator is the level of BS at work and here Mulryan’s First Law of Whiskey might come in useful. It goes something like this: the further removed the brand is from the source of the whiskey, the greater the quantity of bullshit the consumer can expect.

So at one step removed, the whiskey narrative revolves around casks, because that’s all the brand owner can talk about. If you double the  distance from distillery to brand, you double the BS. Second level brands usually recall dead Irish heroes, double again, and you are in the desperate realm of Leprechauns.

Next watch out for the dreaded ‘Brand Story’ sometimes called the ‘Brand Proposition’. There any many kind of brand stories and most involve what I call ‘magical elixir’.

If you are setting up an Irish whiskey brand and want to save yourself a fortune, this is the winning formula you’ll get from an agency after parting with your left kidney.

Let me break that down for you.

[INSERT BRAND NAME] Irish Whiskey is the best because of our [INSERT MAGICAL ELIXIR]. And we have [INSERT SUPERLATIVE] barrels that imparts [CONSULT THESAURUS] the unique finish that speaks to our heritage [DATES ARE GOOD].

Let’s work that through with an example, so you feel like you are getting value for that kidney.

Ballyduff Irish whiskey is the best because of our unique magical well water/mysterious private island/irrelevant historic event/dead person’s name we’re using. And we have access to the finest barrels/casks/puncheons/wood policy that imparts the unique finish that speaks to our heritage stretching back to the Jurrasic era.

Ok, I’m a cynic. But that’s what you get after working in the media for untold decades.

So (you might well ask) what makes Velvet Cap different? On one level, not a lot really. It’s a sourced whiskey with a back story. But we don’t deny it, as Banarama famously said to Fun Boy Three: ‘it ain’t what you do, it’s the way that you do it.’

To start with we try and avoid the allure of cliche, but respect the tropes (the former being an overused truism, the latter a device or idea what is expected). That means no magical elixir, and the back story of a bonded Irish whiskey brand brought back to life is true and relevant because it’s local. The only licence we took is with the 1880 date which has nothing to do with us, as I wasn’t even born. But remember dates are good! 1880 is in fact the year Thomas Power & Co of Dungarvan (who started Velvet Cap) was established, that date appeared on their promotional literature.

SECOND BIT ABOUT THE LIQUID

Velvet Cap (in common with the vast majority of Irish whiskey brands) is at BS level one. So let’s swipe right and talk about casks.

The idea with Velvet Cap was to produce an everyday whiskey reflecting the kind of casks a bonder would have had in their warehouses during the first part of the 20th century. It’s interesting when you dig into the company archives of Thomas Power & Co to see how after the Second World War, casks of any kind were in short supply. 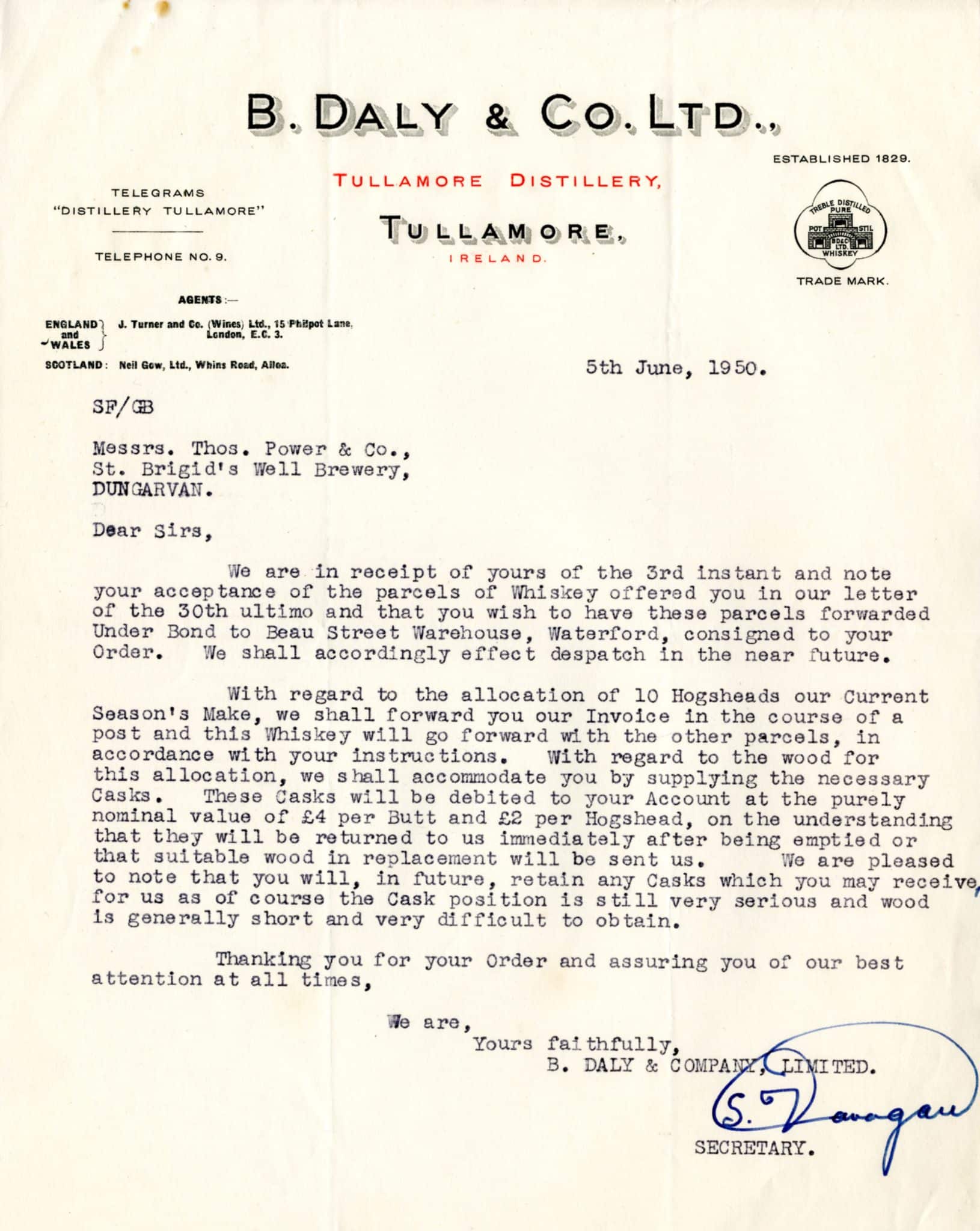 As spirit merchants Power’s of Dungarvan would of course have access to the freshest fortified wine casks, and in this letter we can see a distillery requesting access to that stock. This for us was an eye-opener.

The records of Thomas Power & Company are far from complete, but as you can see below even in the late 50’s Power’s were importing hogsheads full of wine from Portugal. 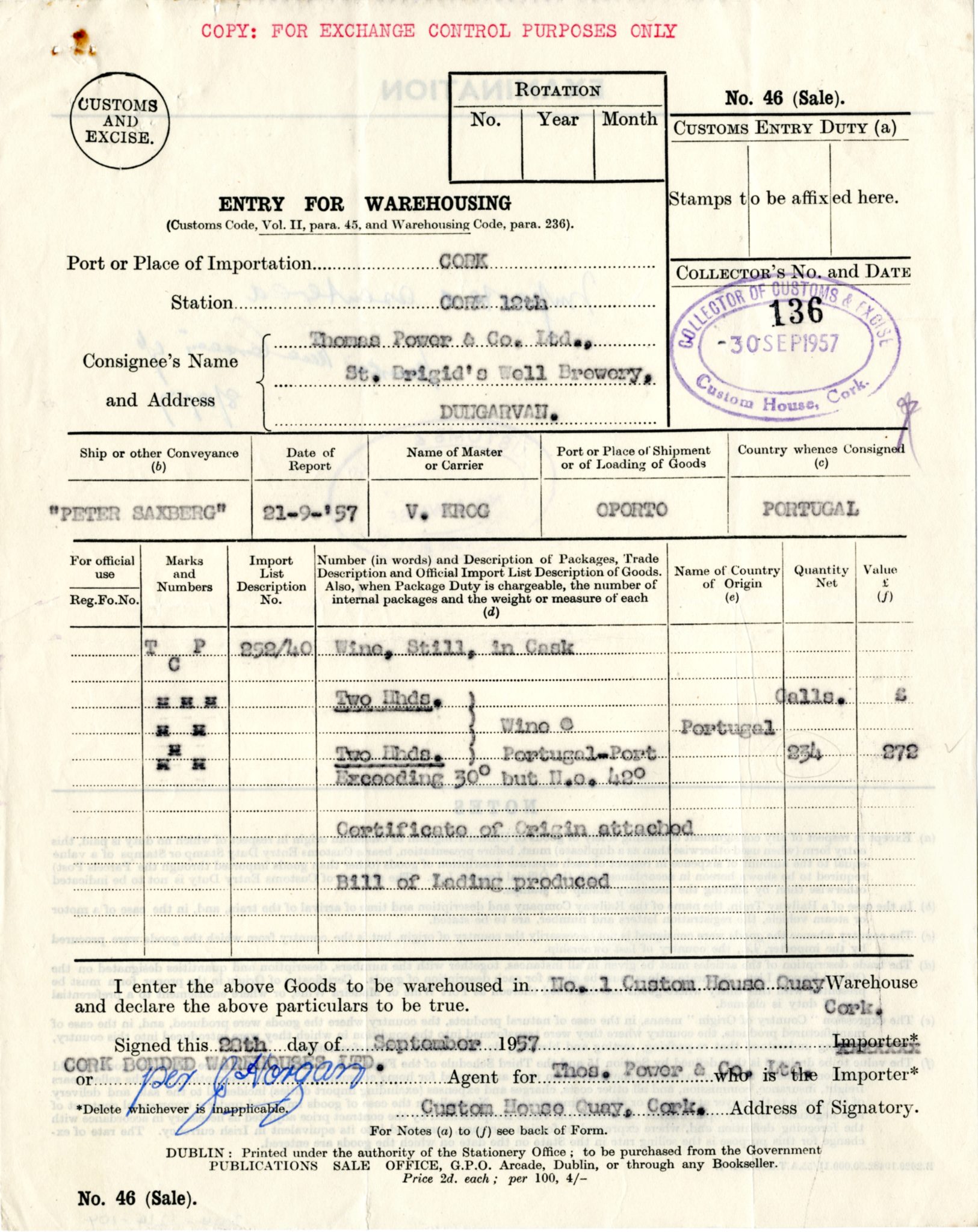 As well as importing barrels of wine and fortified wines, Power’s clearly had a need for the finest empty port pipes from Sandeman. 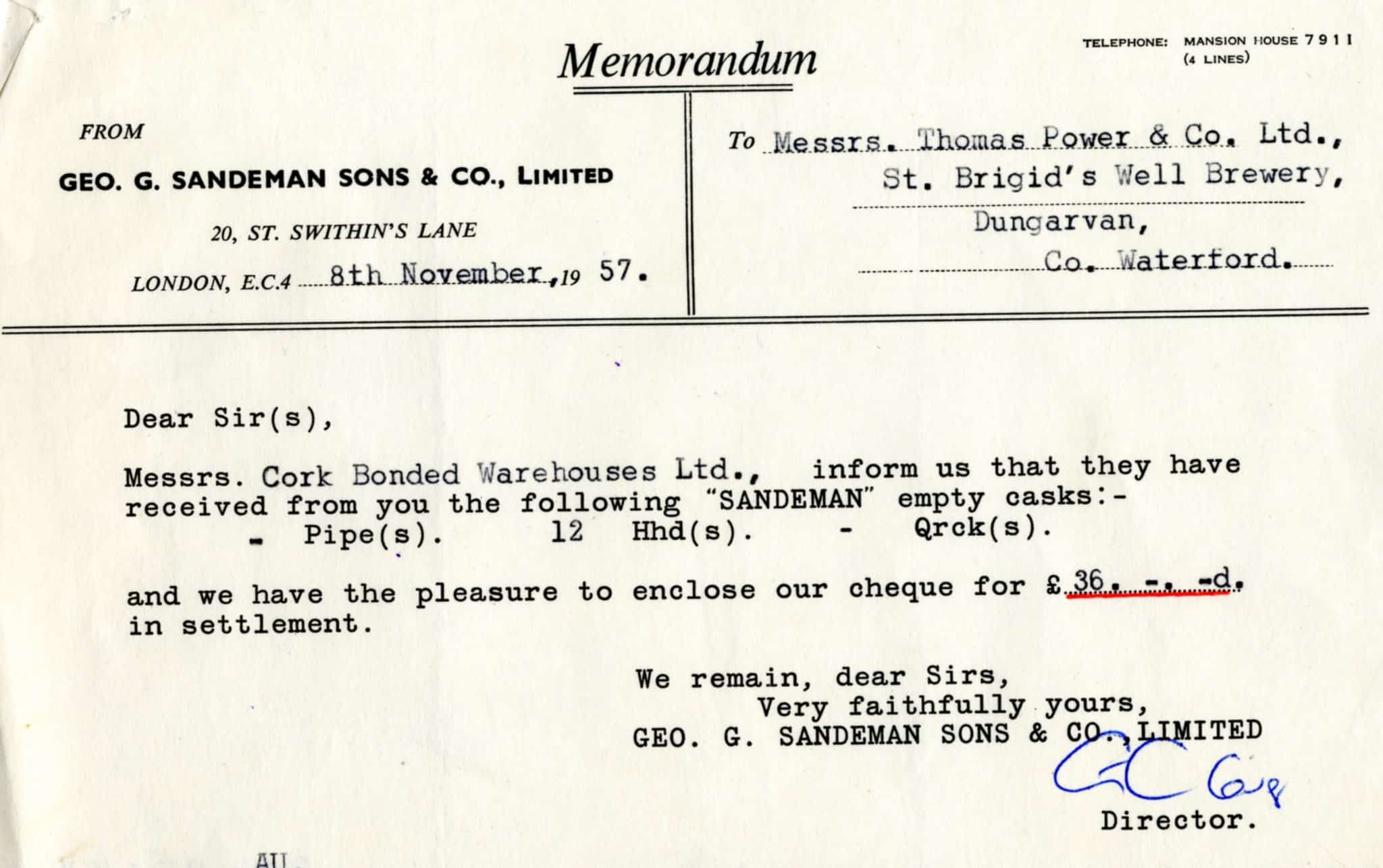 With the modern incarnation of Velvet then, all this information was filtered through the imagination of our American Head Distiller, John Wilcox. He was keen to build on the bonder theme by incorporating stout casks into the finish, as we know Power’s bottled a lot of Guinness, and until the mid-1950’s the stout traveled to Dungarvan in wooden barrels.

This was John’s starting point, but he wanted to put a modern twist on the blend, so a percentage of the casks we used for finishing were ex-rye. These along with some ex-bourbon barrels were filled with stout and left for between 3 and 6 months. Meantime a blend of double distilled malt and grain whiskies were married 50:50 and that blend was filled into the ex-stout casks.

The whiskies we used were between 3 and 4 years old, which as you can see from this letter was pretty much what Power’s were purchasing. 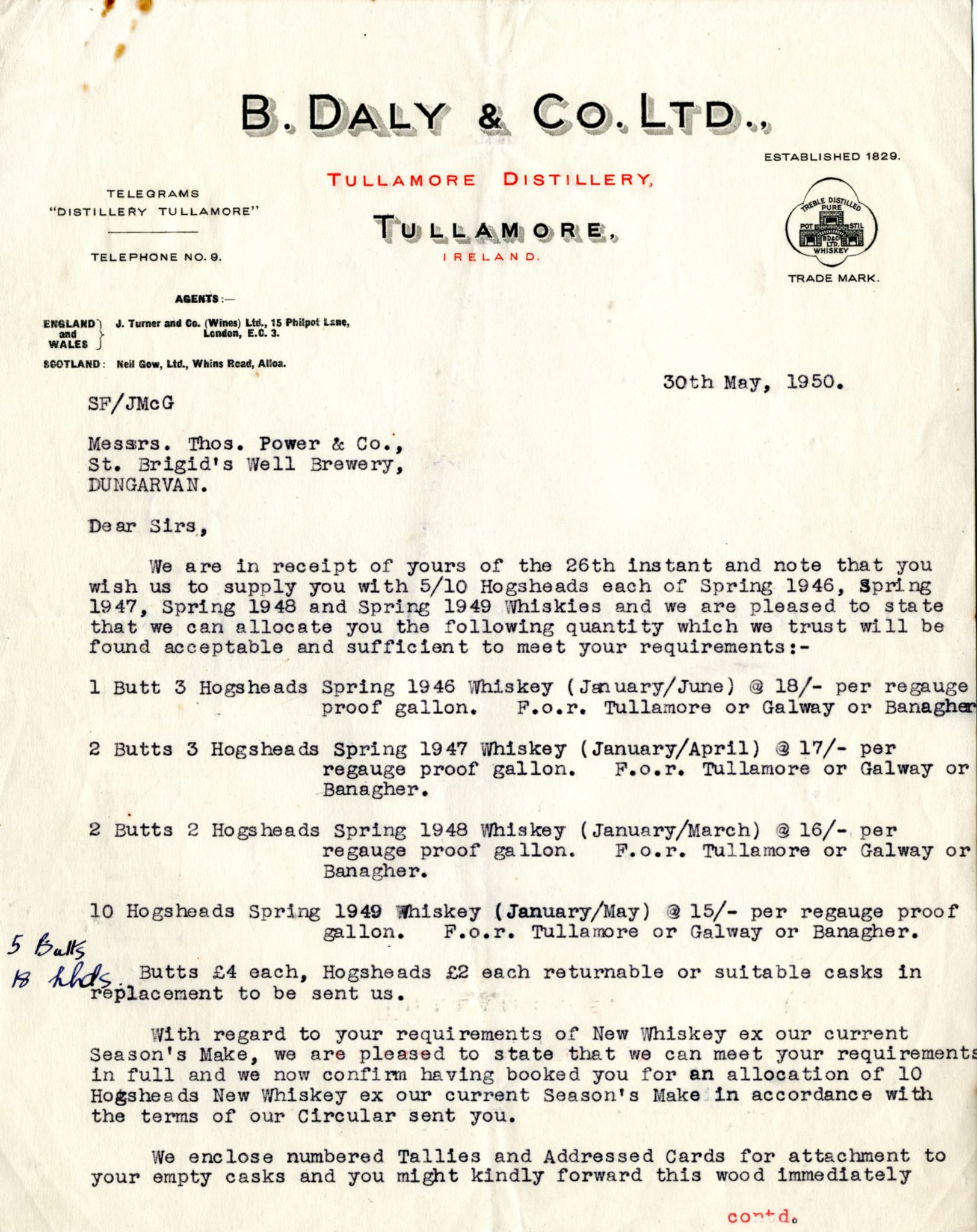 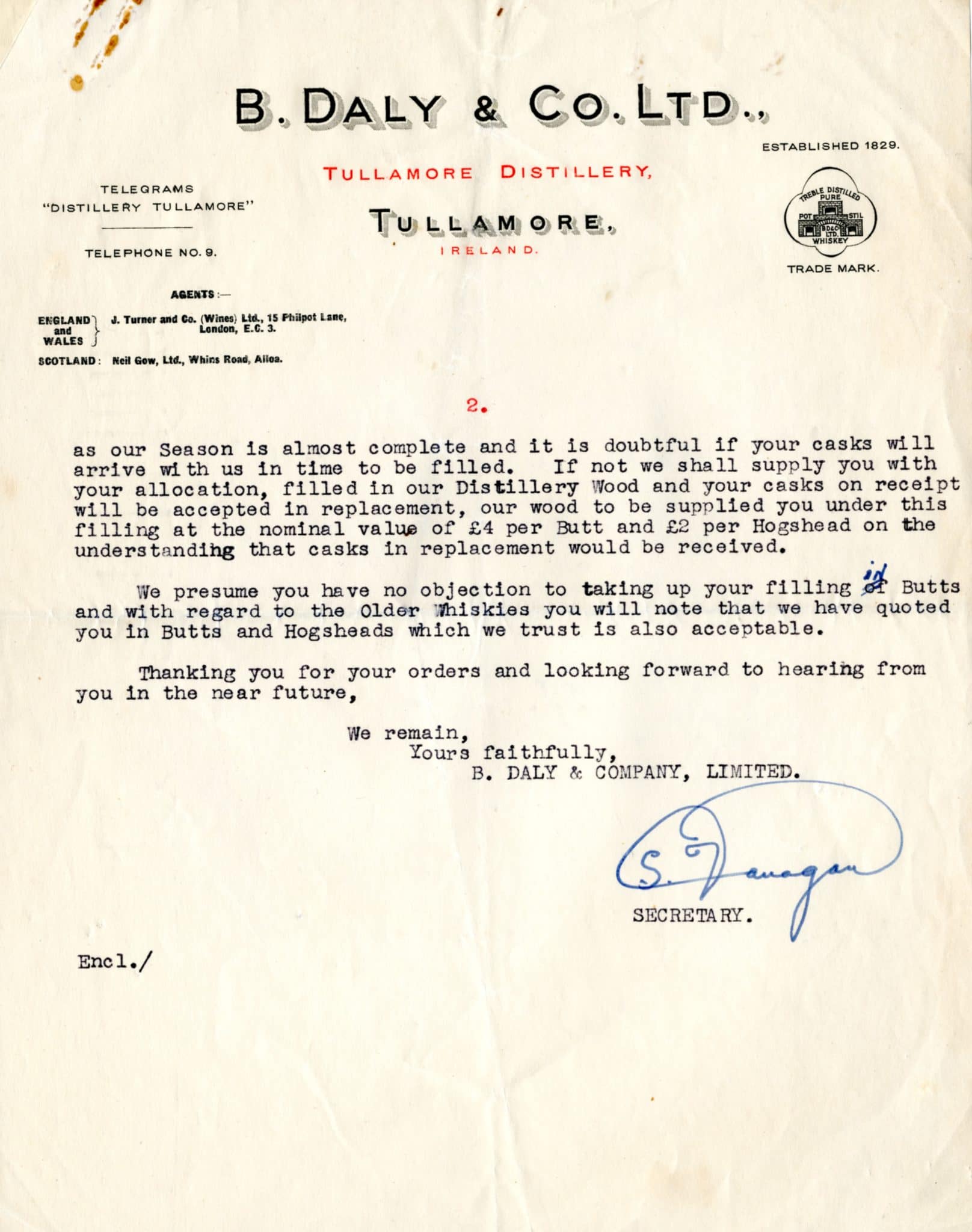 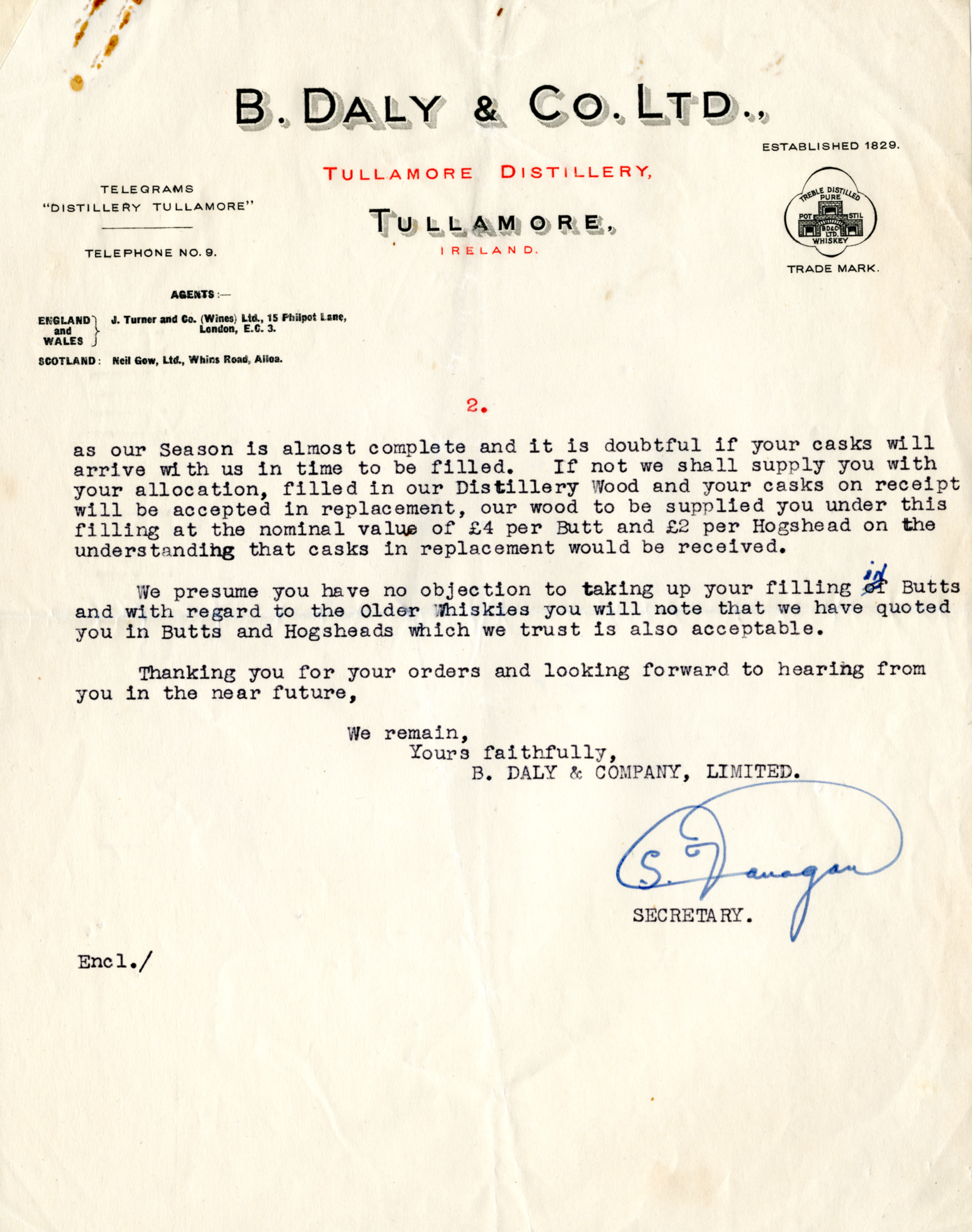 Now as then, it’s cheaper to buy new make, but that puts a drain on cash flow, so as you can see from this letter, Power’s were probably bulking out their own mature stock with whiskey bought in for blending purposes.

The original Velvet Cap, in common with the vast majority of Irish whiskies in the first half of the 20th century was probably a pot still (made with around 15% oat and 5% rye). But this is not made clear on any invoice I have seen, where purchased stock is simply referred to as ‘whiskey’.

In the end though whether Velvet Cap works or not largely comes down to repeat business and that is mostly about taste. We like the direction in which this Irish whiskey is going, but let us know what you think.

Batch One is now on sale here or there for the first 150 purchasers, it can be got with a signed copy of my book The Whiskeys of Ireland and a tour of Blackwater Distillery here.