Since 2014 Irish Whiskey has enjoyed the protection of a European Union GI. There’s a rule book or Technical File which lays out how Irish Whiskey (Single Malt, Pot Still Irish, Grain and Blended) is made.

We’ll look at all categories in turn, but let’s start with the least controversial, Single Malt.

When the GI was drawn up, sitting round the table were just two distilleries with their own Irish single malt, Bushmills (Diageo) and Cooley (independent). Indeed those were the days! The Midleton distillery (Pernod Ricard) also produced single malt but only for blending purposes. Single Malt is pretty straight forward, you use 100% malted barely, yeast and water. In 1987 when the arrival of Cooley broke Pernod’s monopoly in the Republic of Ireland, they did so in style by double distilling their malt and used peated barley. A precedent had been set and this is reflected in the Technical File.

So forget triple distillation and peated malt, the only radical difference between how Single Malt is allowed to be produced in Ireland and Scotland, is that in the former you can age in any kind of wood, while our cousins have to use oak casks. 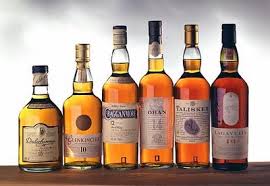 But Scotland has made this category its own. Across the Irish Sea, in 1988 the snappily named United Distillers and Vintners (later Diageo) launched their Classic Malts series. Six named Scottish distilleries were singled out, their bottles popped up on bar risers across the UK and the rest is history. Prior to this Single Malts were not mainstream, these whiskies were constituent elements in the world conquering blends of Scotch that had helped bury the Irish industry. Now they were literally put on a plinth and sold at a premium. I was there. We lapped it up.

That was 30 years ago, and in 2017 exports of Scottish Single Malt topped the £1 billion mark for the first time. Now we’re blasé about our Ben Nevin and Bowmore, I mean there at least half a dozen of the buggers in the local Centra. And that’s in Tallow.

At home Tyrconnell and Connemara have grown into fine drams, and while Bushmills still isn’t feeling the love it deserves, the standard 10 year old is world class.

But Ireland is also awash with merchant brands, in other words pretty much the same liquid; but like characters from the Lord of the Rings, each with a different and suitably incredible back story.

So if you’ve got this far and thought ‘God, this is all a bit pedestrian. Where’s the drama, the anger, the outrage!’ Here we go.

The problem with the current tsunami of ‘me too’ malt whiskey, is that it’s mostly cut and paste liquid with notions and that’s not good for the industry. For all their protestations, clever word play, embossed labels and branded bottles, this stuff is to whiskey what Phil Collins is to music. Sure you can stick your malt in a wacky barrel, but Phil Collins in an Elvis suit is still Phil Collins.

But what happens when even my Phil Collins analogy breaks down. Well in Ireland we’re straight into the realm of Flann O’Brien. I mean have you heard of the Irish Distillery that was set up in 2017, but as yet doesn’t exist. It’s run by a ‘distiller, producer and bonder’ who is neither a distiller, producer or bonder. Truly he is the DeSelby of the Irish whiskey world and quite probably part-bicycle too if he’s taking us for a ride like this.

We have the talent, but are downing in a sea of tribute acts. With Dingle and Pearse Lyons in the market and malt to come from (among others) Renegade in Waterford, Glendalough in Wicklow and The Shed in Leitrim the future is looking good. We just need to insure that in the mean time the public don’t mistake Russian Bon Jovi for the real thing.