Happy New Year! It’s been six months since my last blog, sorry about that. It’s not that I didn’t have something to say, it’s more that we’ve been rather busy cooking up some Irish whisky.

So what did we get up to in 2019 and how will than inform what we do in 2020? Well our first new make spirit (a single malt) went into cask on Christmas Eve 2018. Single Malt is the easiest style of whisky to make, so that’s how we eased ourselves and our kit into the new order.

After we had casked the single malt, we turned out attention to making Single Pot Still Irish Whisky (SPS), you know the stuff that goes all the way back to 2014. First up (we called it) Yardstick I, that 50:50 mix of malted and unmalted barley (compliant with the Technical File and therefore historically inaccurate).

We followed that liquid yawn with the magic ‘5% other grains’ (again as recorded in the Technical File and allegedly passed down from Moses or something). For the sake of fairness, we cut that 5% three ways between oats/wheat/rye. That gave us Yardstick 2.

You see, before we could examine the legacy of actual real historic SPS mashbills, we had to have something to compare them to. So each GI compliant SPS went into three different types of cask: ex-bourbon, ex-Oloroso and new European oak.

Now with two compliant SPS mashbills under our belt, it was time to go off-piste. And this is where the oats come in.

Between February and September 2019 we distilled over 100 distinctive and different SPS mashbills. The vast majority of these mashbills could be traced back to a specific distillery, or a specific date, or to both. They covered the period 1824 to 1955. We used recipes from just after the 1823 Excise Act (the foundation of the modern industry), right through the Victorian Irish whiskey boom, to the decade before the whole shebang collapsed into monopoly. We’ve distilled outliers featuring 40% wheat, and 38% oat, but mostly that range of ‘other grains’ settled comfortably in the 20% – 25% band, with oat being predominant. All mash bills contained barley and malt, and all feature either oats, wheat and rye. Some have all five elements. However, not one of these real single pot still mashbills is compliant with the current Technical File. That’s not how we planned it, it’s just one of those awkward facts.

This is how we work. I pass the mash bill on to John Wilcox our Head Distiller, he converts the original to percentages and scales it to our system.

Typically a new mash bill with a high alternative grain content would give us a miserable yield. We might get a wash as low as 4% abv. If after a first pass it proves interesting, John sets to work changing water temperatures and rest times, yeast and enzymes, until he has pushed what we can do as hard as we can with our current system, and we were get close to 7% or 8% yield. Then that SOP (Standard Operating Procedure) is locked and we move on.

So we had to relearn how to make whisky. We had to strip the whole process back and start over. I’ll be honest, it was equal parts frustrating and rewarding. But making Irish whisky the old fashioned way, putting flavour and not efficiency at the heart of what we do has been transformative.

We could have spent 2019 churning out single malt, or compliant SPS, but we chose not to. As a result we only ran at close to 50% capacity. It was an expensive exercise, but we can now safely say there isn’t another distillery in the country/world that has dug into the SPS category as deeply as we have. Which sets up up nicely for 2020.

Over 131 years of recorded historic single pot still mashbills, through famine, revolutions, Civil War, and Independence, oats were king. The humble oat is the single thread that runs through the vast, vast majority of historic SPS mash bills. Oats are Ireland’s gift to the whisky world and as we will see, they have been written out of history.

In the Pernod Ricard/Irish Distillers blog post from early last year, defending the indefensible SPS Technical File, former Midleton Master Distiller Barry Crockett sets out the case: ‘oats were phased out entirely before 1970, as it was not seen as providing any flavour benefit.’

So why have we evidential proof that oats were used in significant quantities to make Irish whiskey?

In an interview with Spirits writer Dave Broom, Pernod archivist Carol Quinn states: ‘although no doubt they (oats) contributed to the flavour profile, their inclusion had a more practical reason. The hulls and husks of oats aided the draining of the wort, acting as a sort of natural filter.’ Firstly, there is a big difference between using oats (the grain) and using the very coarse outer husk of the oat. Secondly on flavour, Quinn contradicts Crockett.

So that’s it. The new official truth: oats were the fibre that kept the small intestine of a mash house open. And in case you are in any doubt, the aforementioned blog post tosses in a quote from R.E Court and V.H Bowers from 1970: ‘Oats remained in use for the prime reason that its husk aided filtration in traditional mash tuns’ (Bowers also worked for Irish Distillers). 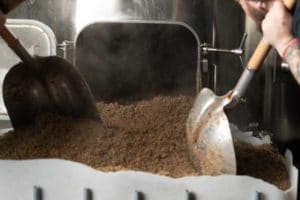 Oats and oat husks are two different things and shouldn’t be confused. Alfred Barnard mentions oat hulls and husks being used for drainage, but here the primitive mash tun in question was a barrel. At Blackwater we use oat husks to stop high rye mashes from gumming over, it’s common practice. But there’s a big difference between using oat husks to aid drainage, and putting oats (minus their husks) into a mash bill.

As for any additional flavour oats might bring to the party? When the IDL blog states that oats were not seen as ‘providing any flavour benefit’, the evidence would suggest otherwise. If anyone from Pernod wants to skip up the road to Ballyduff, we’d be more than happy to sit them down for a tutored tasting of our new make.

Oats contribute enormous flavour to new make and indeed, at even 5% (as in the inaugural whiskey release from Drumshambo), they make their presence felt. Oats provide a soft, creamy bed on which the unmalted barley can bounce. They were used in just about every SPS mash bill from 1824 to 1955 (and possibly both before and after that) so writing them out of history is madness. So why do it?

Irish whiskey as a category is still finding its feet, so when it’s described as smooth, triple distilled and spelt with an ‘e’, these are all highly successful brand propositions, not category statements. So if the entire SPS Technical File can be built around a single brand propositions, then all the better. Facts can be cut to measure. 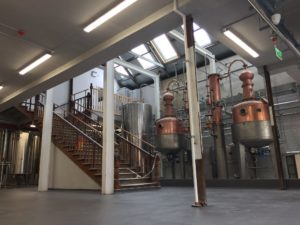 There is a simple reason why by the late 1960s oats disappeared from Irish whiskey, and that reason is the foundation of Irish Distillers. The more complex question is: why did the then monopoly producer abandoned the grain?

There is no doubt that in the 1940s and ’50s the industry was under huge pressure. In that period we lost Daly’s of Tullamore and Locke’s of Kilbeggan as the industry was taxed to destruction and exports slowed to a trickle. The foundation of Irish Distillers in 1966 is nowadays spun as an Irish Dunkirk. You know the drill, victory snatched from the jaws of defeat by a plucky group of families. The truth however is never that simple.

It’s clear as the surviving distilleries struggled to compete, they took more and more character from their spirit. By the early 1970s, almost the entire portfolio of Irish whiskies had been simplified, stripped of flavour and reformulated as blends. Oats therefore were doubly doomed. As well as having a distinctive flavour, they are low on starch, so restrict yield. As IDL strapped itself to the lifeboat that was the Midleton distillery, increasing yields must have come on the agenda and squeezing an extra % out of each and every wash by replacing oats with malt had to be a no-brainer.

So why get so worked up about all of this? Here’s why.

Having successfully created a SPS category in the image of Midelton distillate, Irish Whiskey Inc. has now painted itself into a corner.

If you go to the SinglePotStill.com website you won’t find a independent category website, but rather a platform for Pernod products. The paternalistic attitude that Aeneas Coffey met a century ago is again evident.

The Law of Unintended Consequences comes into play when you re-write the rules of any game to suit one player. And everyone slipping on the green jersey of solidarity needs to remember those rules were not designed for their benefit.